The market of display mannequins is leaded by brands such as many sector.
Some are famous and provide energy to this market in permanent evolution....

Let’s get know them better.... 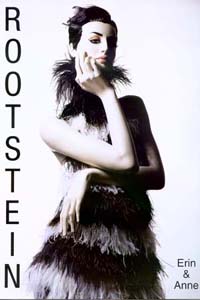 In an interview with Larry King, Karl Lagerfeld said, "The concept of beauty changes with the times. What is beautiful today, might not be considered beautiful tomorrow. On the other hand, what was beautiful 20 years ago, is not the ideal beauty today."

Mannequins has always been considered as the reflection of the "ideal beauty" during the time that it was manufactured. And if there ever was a mannequin company who understood it best, it is Adel Rootstein.

Adel Rootstein & Co. started during the early 1960s, when Britain was beginning to influence the world of fashion. Mary Quant and Jean Muir were the symbols of the new movement. The personality cult was in full swing.

But there was a major drawback in the London fashion scene - mannequins. The ones displayed in store windows were stilted, stylized, rigid and lifeless. In short, they look like "dummies," and very far from the glamour and beauty of the fashion runways.

Extensive experience in window design had given Adel Rootstein an awareness of the void that existed between the catwalk and the store windows.

Adel wanted to fill that gap. With the Adel Rootstein Company, she was able to create a whole new generation of window mannequins, and finally bring the fashion catwalk to store windows.

In short, Adel turned fantasy into a living legend.

A Rootstein display mannequin starts life as a sculpture based on the chose model, a process taking several weeks to complete. The result is a figure which expresses the mood of fashion embodied in the qualities for which the model has been selected.

From this form, a plaster cast is made which is then used to produce the final mould. 80% of the perfect fiberglass display mannequins to emerge from this mould are exported all over the world.

Fashion which was once dictated by individuals, whether personalities or designers is now equally determined by economic and social climate, either as a statement of it or a fantasy flight from it.

Adel Rootstein mannequins continue to capture, reflect and transmit the evolving fashion shapes by epitomizing "the moment" as each mannequin is created. 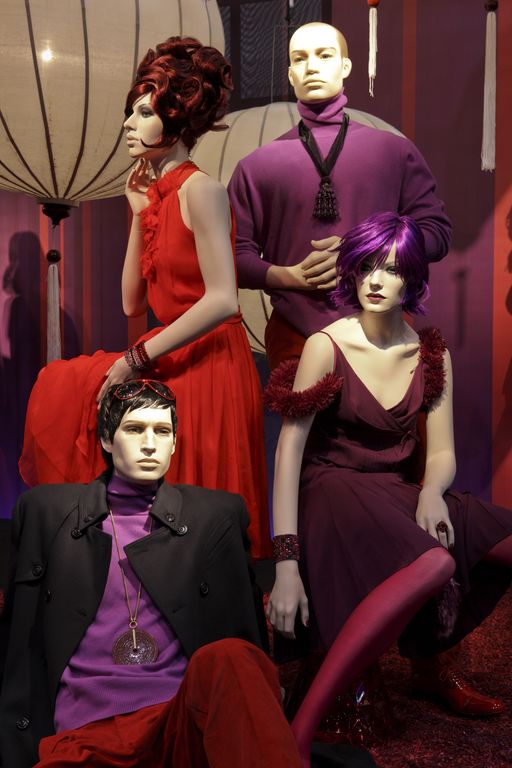 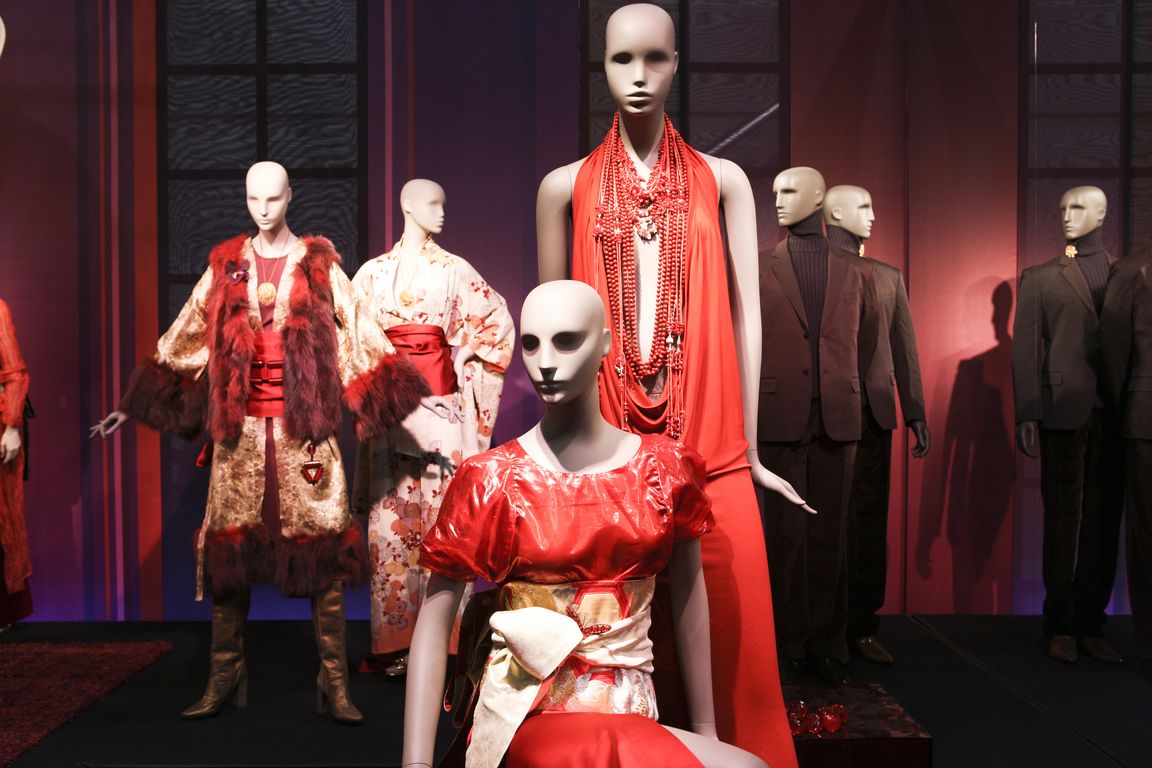 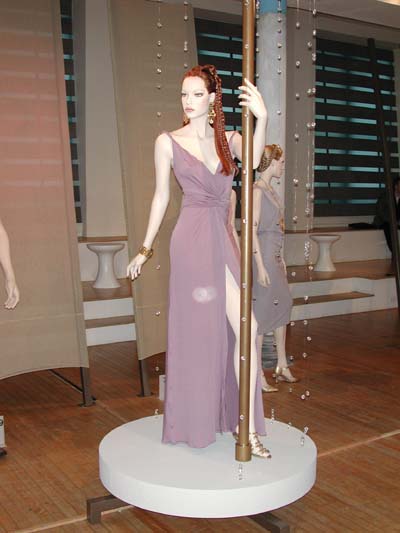 Established in 1987, Patina V mannequins are known for their "definitive look and flair." Stylish and fashion forward, these display mannequins reflect the latest fashion trends and perfect for your windows dedicated to fashion. Think of you store windows as a fashion runway and Patina V mannequins as your catwalkers!

From realistic window mannequins to sculpted head, Patina V has several lines of display mannequin  ranging from tweens to the sophisticated fashionista. 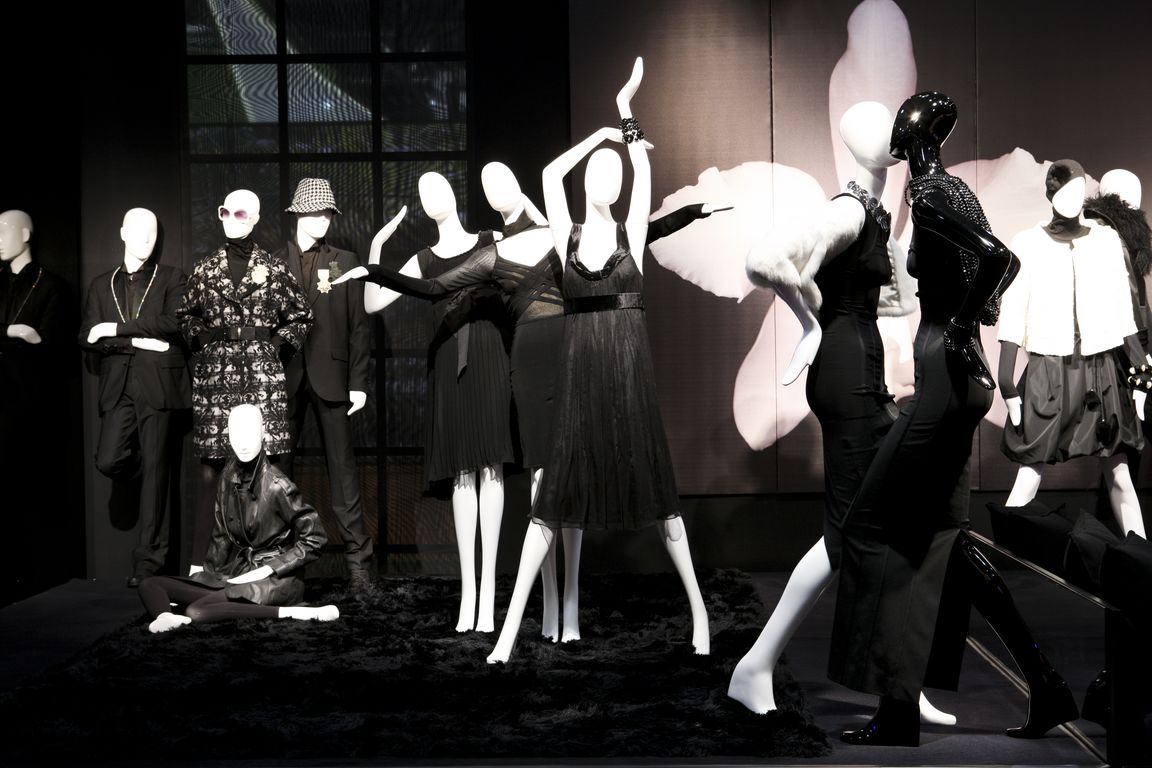 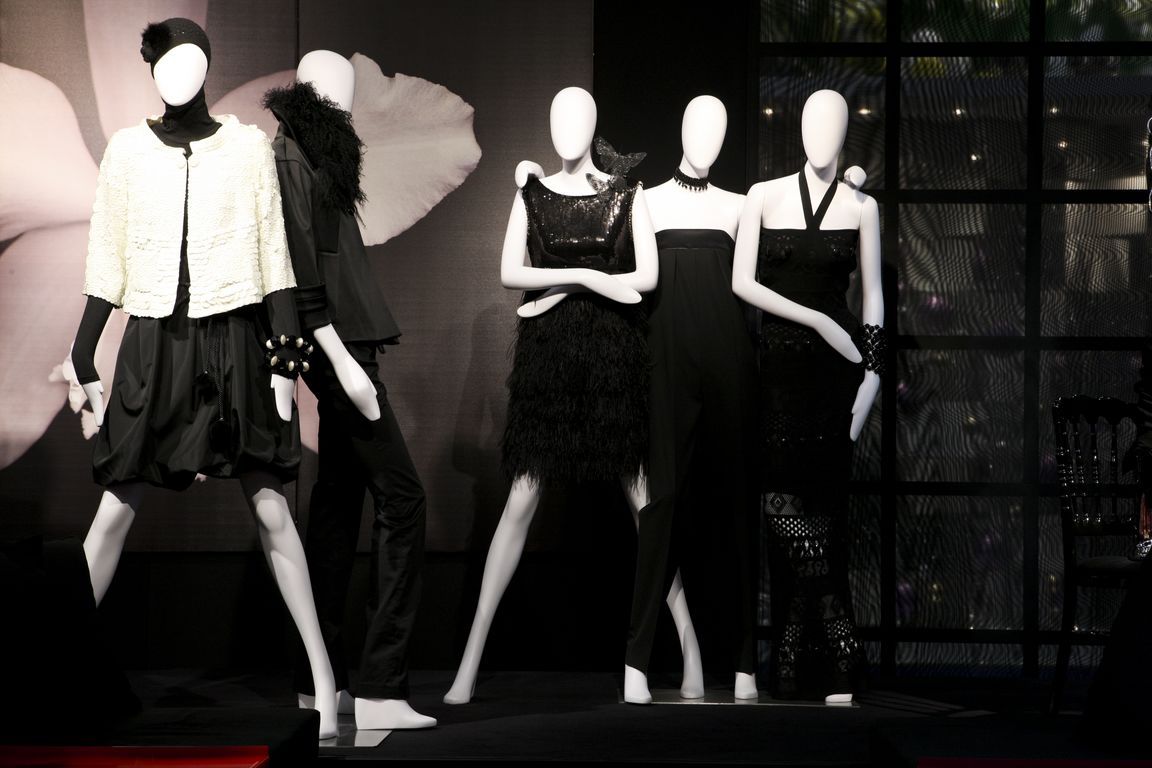 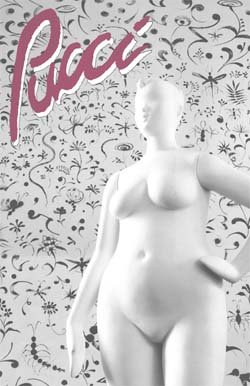 LEADER OF THE AVANT GARDE

In the 1950’s The PUCCI family business was a name synonymous only with repairs. But when Ralph Pucci headed up the business in 1976 Pucci started manufacturing their own line of window mannequins.

Today the 15,000 sq. feet gallery-like showroom in Manhattan is filled not only with mannequins but with lifestyle furniture, artifacts and artwork too. Early on, the Pucci Mannequin company quickly made a name for themselves as separate and distinct by producing lifestyle and athletic poses that very much captured the spirit of the Calvin Klein and Bruce Webber era.

"We kept very much in the mood of those avant garde times” says Pucci. “We set ourselves apart by spraying the mannequins black or red and took a far more architectural approach by producing mannequins reclining and relaxing. And we’ve always encouraged artists and creators to be involved in our process to keep our vision fresh.”

Among some of the most memorable mannequins produced by Pucci include lifelike renditions of Christy Turlington and Beverly Peel for exhibits at New York’s Metropolitan Museum. However, the biggest changes occurred once they started experimenting with fashion realism and in turn took it upon themselves to commission fashion illustrators and designers to help realize new ideas.

"Two such influences were designers Anna Sui and Karl Lagerfeld” says Pucci. “When you commission outside people you get a re-invention if you like of the world of display mannequins.”

During the time when they commissioned architects like Andre Putnam the models turned out very sculptural - which you might expect. There were a series of Egyptian-looking models finished in gold, bronzes and silvers with real earth tones - and half vase, half woman in shape.

The ones designed by Anna Sui were different to say the least. Close to the signature style of the designer, they sported whimsical blue, orange, pink and yellow hair and some had pure white bodies or pure blue bodies. “Anna Sui’s were flapperish reminiscent of the 1920’s combined with a 1960’s attitude and flea market body pose” says Pucci.

It’s not surprising then that model Michelle Hicks was Sui’s inspiration. “The window mannequins were produced in five body tones with five different faces including lavender and other soft muted tones. They had very big doll-ish eyes, tiny red lips and made up a collection that was immensely successful.” This collection although pure fantasy was still modern, clean and simple

And once again this collection showed Pucci’s versatility and caught the eye of Saks 5th Ave. They loved the body language and Pucci custom-made the whole collection in a high gloss white, with no make up and minimal adornment.

Perhaps the most memorable and innovative were the series that illustrator Kenny Scharfe came up with for a Christmas collection. “One-eyed creatures and flying space-alien style mannequins with rhinestones for eyes wound up adorning all Saks 5th Ave. windows and Santa’s sled flew through space that year” quips Pucci.

llustrator Reuben Toledo perhaps took on the most daring social challenge in modern window mannequin making. After producing an accessory display line for Pucci based on a creature that was half-bird half-woman, his most recent collection called ‘Shapes’ featured a line of petite and plus-sized models designed to be displayed altogether.

’Shapes’ featured a size 18-20 display mannequin  together with a petite series and a very tall 6’ 2 " model. “The big ‘Bertie’ as we called the plus-sized mannequin, caught the nerve of a lot of magazines,” says Pucci. “We were not afraid to make her a very big size with a big rear-end but we still made her sexy. Other companies have done big mannequins, but really she was the first very hip large mannequin. The body skin tone was white with a water wash black-and-white treatment for the face that you’d expect since an illustrator designed her. But more to the point, she was designed to be dressed in a hip way with fun, skin-tight, revealing outfits.

In fact, Toledo’s wife Isobel dressed the line and in particular she chose to dress the big ‘Bertie’ just the same way as a regular size four - right off the fashion runways. We felt it was time to show our customers that all size people go to hip clubs, restaurants and so on.” 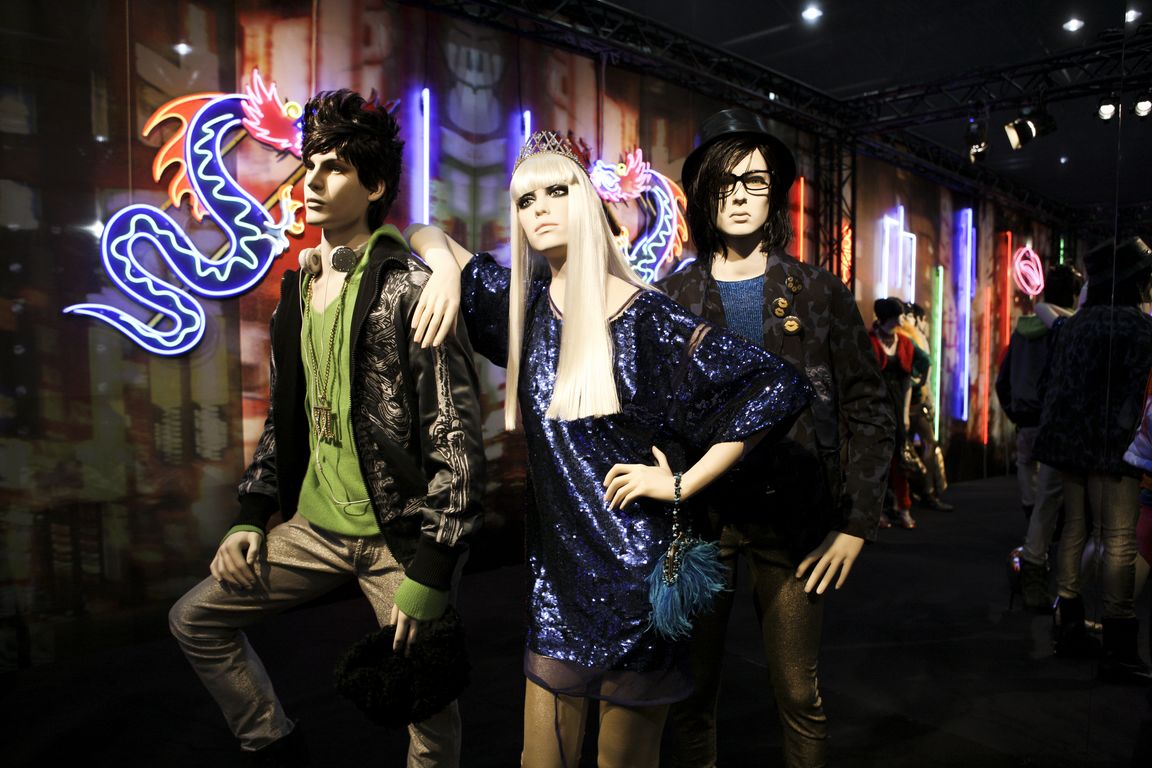 Nothing can surpass the French know-how, it " I - not - know what " which, in fashion, made all the difference.
According to the wishes, reflection, conception and creation are confided to the team of professionals of About Display to give life to display mannequins realized in closer of your envy. 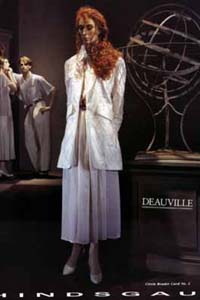 Established in 1913, Hindsgaul is one of the oldest mannequin companies still in existence today.

One of the reasons of their longevity is their philosophy of being "a partner" of the retailer and not just a supplier. Their design department prides themselves with quality workmanship and which their clients have learned to rely on and expect.

Almost 100 years in existence, one of Hindsgaul Mannequins strength is it ability to change with the times. Their window  mannequins are modern and contemporary, reflecting the current looks of today’s market.

Article edited with the free HTML composer tool. Use this web content editor to make sure your markup is error-free.